Dozer is a Slyren Slug who belongs to Eli Shane. Eli obtained Dozer in Snowdance Cavern in the episode Snowdance in order to lull a pack of ice ogres, and later the Hooligang to sleep.  Eli uses Dozer again in "Lightwell" to put a hive of Bees to sleep. He was used in "Keys to the Kingdom" while fighting El Diablos Nacho. He also appears in Buzzsaw in: Going to the Frientist, trying to scare/help Buzzsaw. 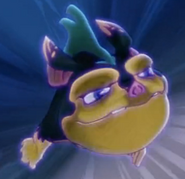 Add a photo to this gallery
Retrieved from "https://slugterra.fandom.com/wiki/Dozer?oldid=82483"
Community content is available under CC-BY-SA unless otherwise noted.