Common Earth slugs, Diggrixs are common digging slugs that can be found in grassy knolls.

A Famous Diggrix is Rex who belongs to Eli Shane.

The Diggrix is essentially a dumbed down version of a Crystalyd slug. Like Crystalyds, it is a solid retreat and strategic slug, although its attack is lacking compared to many other slugs. It could be used for a quick escape easily, with silt screen distracting an enemy slinger and tunnel sneak being used to make your way out. Used in conjunction with slugs like the Geoshard or Frostcrawler, a slinger could create a wall and escape before an enemy knew what was happening. 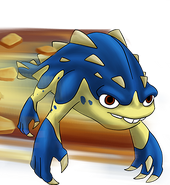 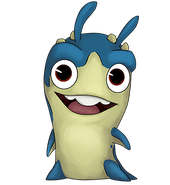 A Diggrix on a broken and rusted Mecha Beast.