Vance Bolt (Formerly)
Eli Shane, but shared with the Gang

Digger is a Crystalyd Slug who belongs to Eli Shane. It was given to Eli by Vance Bolt in "The Slug Run".

He appears again in "Snowdance". In "The Thrill of the Game" Digger, along with Spinner, is seen helping the Shane Gang escape The Game Master's lair. He is used mainly by Eli and Pronto in the series. In "Return of the Elementals" he makes his debut appearance as a Mega Morphed Slug. 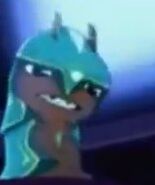