"The Fall of the Eastern Champion"

Darkfurnus[1][2] are extremely rare and powerful fire ghouls and the ghouled form of Infurnus slugs. 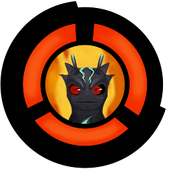