Dark Water or Karum-Zanul as the Cave Trolls call it, is what Dr. Blakk uses to turn regular Slugs into Ghoul Slugs. Dark water can be mined from deep within Deadweed Cavern or drilled for in deep places like the Undertow. Bullseye Cavern was also mined for dark water, nearly resulting in the death of the entire cavern system.

Mecha Beasts can also be ghouled using dark water, though the process is more difficult since the dark water needs to be injected into their core, rather than just immersing them the way Slugs are ghouled.

In Deadweed when some miners were exposed to dark water they took on a ghostly appearance until the well of dark water was sealed, allowing them to return to normal. The ghost miners' weakness is the Nightgeist slug.

Dark Water can also cause other affects on the body aside from turning it into a ghostly state. In Slugterra: Return of the Elementals, Dr. Blakk, after being sent into The Deep Caverns in Light as Day, has undergone mutation due to exposure of Dark Water, which gives him larger muscles, dark claws, sharp teeth, tusks on the edges of his chin, horns on his forehead, dark red eyes, and the size bigger-if-not-equal-to that of a Cave Troll. He can also turn slugs into ghouls with his bare hands.

While in The Fall of the Eastern Champion, The Emperor gained immortality after he fell into a pool of Dark Water. It made him stronger than a man, but it also made him less of a human. He also gained other powers such as the ability to create Stone Warriors, Ghoul Slugs and his Sword Blaster.

In Back to Blakk, Dr. Blakk opened a portal to The Deep Caverns when he was experimenting with Dark Water.

Dark Water, being ladled out with a Ghoul tube.

A small amount of Dark Water, unearthed by accident.

Effects: The Miners of Deadweed Cavern

Dr. Blakk ghouling a Rammstone without the use of Ghoul Machines 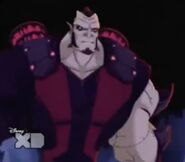 The Emperor fell into Dark Water

The Emperor gained a new appearance

The Emperor ghouled a Grenuke

The Emperor created a Greneater

The Emperor created his Sword Blaster

The Emperor ghouled a Guardian Boon Doc, turning it into The Goon

The Emperor sent a blast of Dark Energy towards Joo-Joo, turning him into a Darkfurnus
Add a photo to this gallery
Retrieved from "https://slugterra.fandom.com/wiki/Dark_Water?oldid=87646"
Community content is available under CC-BY-SA unless otherwise noted.