The Emperor
The Goon
Darkbane

"The Emperor Strikes Back"
Dark Servants or "Dark Slingers" (dubbed) are beings who were transformed into evil versions of themselves using a method of ghouling to force the being to join and conquer lands in the name of The Emperor.

First introduced in Slugterra: Ghoul from Beyond, Junjie, better known as "The Dark Slinger", was the first of the Emperor's Dark Servants to emerge.

After suffering a major loss to Yang the first Eastern Champion nearly 2000 years ago, the Emperor would eventually manage to free himself from his prison and achieved what he failed to accomplish all those years ago, and all with the help of his greatest enemy by his side while doing it.

Serving under the will of The Goon, a special Goon Doc the Emperor created and used to defeat Junjie; for 20 years, Junjie was forced to conquer and expand the Emperor's forces over The Eastern Caverns; his home and the caverns he once protected, and had to retrieve all the slugs in the caverns for the Emperor's grand plan, but later he would be tasked to do the same in The 99 Caverns.

However once the Dark Slinger arrived in the West, the Shane Gang would foil the Goon's plans and free Junjie of his curse, only to have the Goon escape and later find more slingers to turn into Dark Servants but even they too would be freed but yet again the Goon would manage to escape complete defeat.

In the meantime, back in the Eastern Caverns, the Emperor would come up with other ideas to improve and expand his army, by creating an entire army of Dark Servants only loyal to him and he managed to prefect the process through other means, with the first subject being Junjie's master, Lian, later known as the Dai-Fu, who was captured during Junjie's defeat.

However upon Junjie's return to the East and with his new allies by his side, they would foil the Emperor's plans to create such an army and free the East from the Emperor's reign, however Lady Dai-Fu wouldn't be as easily defeated.

The Dai-Fu's loyalty to the Emperor would continue to be a problem for the caverns and it isn't until the Emperor's return, that the future of the Dai-Fu, Dark Servants and everyone else revealed; not measuring up to his expectations, he decided to replace all his armies with unbreakable superweapons known as the Unstoppable Warriors. Ultimately, this process would however undo and release the Emperor's control over his last & only known Dark Servant left. 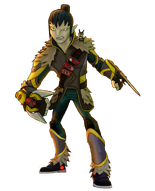 Ghoul from Beyond - Junjie 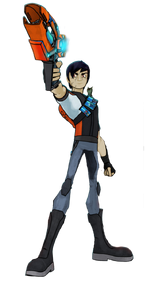 Ghoul from Beyond - Eli Shane

Return of the Elementals - Will Shane

Return of the Elementals - Dr. Blakk

When Junjie was first possessed