C.C. was once a respected slugslinger, until he became affiliated with Dr. Blakk. He is seen slinging Thrashers and Frostfangs. His blaster has numerous attachments.

The somewhat spoiled son of a wealthy family from the Western Caverns, CC always has the latest in blaster mods and armor technology. CC loves a good taunt and a good duel, especially when he wins.

C.C. debuted in episode 3 of Slugterra, The Trade. He was brutalizing Slugslingers who challenged him when the Shane Gang arrived. He overpowered them until Eli borrowed Stinky from Pronto. C.C. rebounded the Slug with his Frostfang, getting Eli at gunpoint. However, this gave Pronto, Trixie, and Kord enough time to surround C.C. He walked away soon afterwards but gave a warning, saying that his associates have "redecorated" their hideout.

He reappears, slightly redesigned, to tag Eli with a Jollyfist so Dr. Blakk could follow Eli to the Lightwell. At the end of the episode he was taken by the Shadow Clan. He reappears in Back to Blakk as one of the goons to break out Dr. Blakk From Stalagmite 17.

C.C., with Eli at blaster-point.

Except Eli was only bait so Trixie could circle around behind C.C. 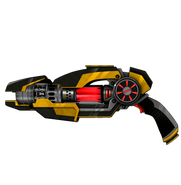 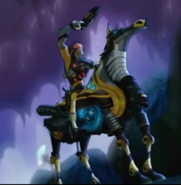 C.C. about to 'save' Dr. Blakk.
Community content is available under CC-BY-SA unless otherwise noted.
Advertisement