"Slugterra: Into the Shadows"
Burpy is an Infurnus Slug from The 99 Caverns and the signature slug of the series' protagonist, Eli Shane.

There's one slug who stands out from all the others, Eli's best slug buddy BURPY. Burpy was part of Will Shane's arsenal until he was sent to find Eli right before Will went missing. He's Eli's faithful companion, an ultimate fire-based weapon, and master slug strategist. He's also the general to Eli's army of slug buddies. Extremely loyal to Eli and more clever than your average slug, Burpy's got slug moves most people have never even seen before!

Burpy was in Dr. Blakk's arsenal, (Blakk most likely claimed the slug after beating Jimmo Shane) until he escaped his arsenal and went to Will Shane in a duel between Blakk and Will, after Will Shane invited the slug to him. It was a great choice, considering Blakk was rude and aggressive towards his slugs. Burpy and Will had a great Slugslinger and Slug relationship, and Will Shane always took great care of his slugs.

The Journey with Eli Shane

When Blakk sent Will Shane into a Dark Terraportal, Will shot the Slug and commanded it to find Eli and give him the letter. After Burpy reached The Surface, he informed Eli of his father's unfortunate fate and showed him the letter. The Infurnus remained with the young Shane, until he turned 15 and made the journey down to Slugterra.

With Eli, Burpy had great adventures, new experiences and learnt new skills. From journeying out to the Eastern Caverns, and experiencing Slug Fu to going Megamorph and increasing in power, Burpy had a wonderous journey. He was Eli's number one Slug, but most importantly, his best friend. The two of them made a great team, and together they saved Slugterra and protected it from all evil forces.

Burpy has the normal slug physiology, with orange skin colour with flame designs on his head and stomach. Originally Burpy was a regular Infurnus. After Megamorphing he stayed in that form.

Being used as a torch 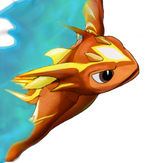