Bubbaleones are Uncommon water element slugs found mainly in rocky streams and freshwater rivers. In its protoform it is similar to a Lavalynx. When they hit 100 mph, it turns into a large bubble-like version of itself. They can also blow bubbles in protoform, as seen in "The Gentleman and the Thief."

A Bubbaleone can be useful against a gattler. The slug's skin is unbreakable and perfect for fighting mimics or explosive slugs. Bubbaleones can also be used as a form of transport, both through the air and underwater.

A famous Bubbaleone is Suds, who belongs to Eli Shane.

Bubbaleones are rarely seen in combat, often seen as a weak, largely useless Slug, despite having a solid set of defensive moves.  In "The Journey Home" Eli used Suds as a stall tactic, even though Bubbaleones can do a lot more than simply make it hard for an opponent to stay on his feet.

Bubballo and Tentajet both work to remove opponent Slugs from combat, taking them out of the fight and, in the case Slugs or Ghouls using explosive moves, limits the damage.  In fact, the inside of a Bubbaleone is remarkably tough, able to take a direct, contained explosion and still maintain its velocimorph.

Bubblebound works to reflect attacks away from the Bubbaleone's Slinger and, with any luck, back at the opponent Slinger.  While this move may not have the same area coverage as an Arachnet's Webwall attack, it's still a solid move, often overlooked in the world of SlugTerra.

Finally, Bubbaleones are useful outside of battle for more than just a convenient source of soap. Using their light bodies, a Bubbaleone is capable of carrying a Slinger, even big ones like Kord. This makes for a convenient, highly portable hot air balloon, allowing access to areas that would be difficult to reach.  In addition, Bubballo lets a Bubbaleone swallow their own Slinger. Since Slugs can breath underwater, this can turn the Bubbaleone into a semi-submersible or, with enough weight, a temporary submarine. 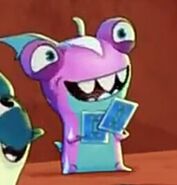 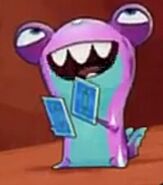