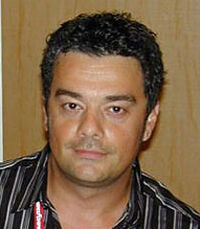 Brian Dobson is a British-Canadian voice actor who voices The Goon in the series, Slugterra.

Brian Dobson was born on September 9, 1973 in England. He is the third of three brothers, the others being Paul and Michael, who are well known for their talent as voice actors.

Retrieved from "https://slugterra.fandom.com/wiki/Brian_Dobson?oldid=80610"
Community content is available under CC-BY-SA unless otherwise noted.