Ruler of The Scrap Heap (Formerly)

“(Insert anything here) makes me want to puke.”
―Ember's catchphrase

Boss Ember is an Octoad (unconfirmed) who is/was the self-proclaimed ruler of Deep Storage and the leader of the Scrap Force. He first appears in "The Hard Part".

Boss Ember is the self-appointed gatekeeper of Deep Storage, the deepest and darkest part of the Scrap Heap. No customer leaves the Deep Storage without going through Boss Ember first.

He's first introduced in "The Hard Part" as the self-appointed ruler of the Deep Storage in The Scrap Heap. While the Shane Gang tries to find a Vitalis Crystal for a Fusion Blaster, Ember's goons would capture them and take them to Ember, who would trick Eli into a unfair duel which would then turn into a gang war. However Eli and the gang would use their quick thinking to defeat and knock Ember into a huge chasm to Deepest Storage, where his fate would be unknown.

However Ember would later return in "Ghoul from Beyond", to pickup from where he left off but as the self-proclaimed ruler of Caverna Mall Cavern, and with megamorph accelerator mods, however yet again the Shane Gang defeated him and Millard Milford took him and his gang into custody.

Then somehow escaping Caverna Mall, Ember and his gang return in "Into the Shadows", where they would host a "Slug-a-Palooza" in Antimony Cavern, however yet again the Shane Gang foil their plans. But Tad would later confront them with an offer they couldn't refuse, so Ember and hia gang agree to the terms, which would eventually lead to a gang war with the Shane Gang and Shadow Clan at Dr. Blakk's old stronghold, and Ember would be defeated again. 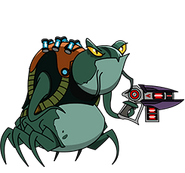