"Slugterra: Into the Shadows"
Blastipede Slugs is an Uncommon Fire Element Slug. It was first seen in Bandoleer of Brothers when Rookie joins Eli's Slug Arsenal and learns he can shoot blue detonators that can blow things up.

A famous Blastipede is Rookie, who belongs to Eli Shane.

A ghouled version of Blastipede is the Disastiped which debuted in Slugterra: Into the Shadows.

A Megamorph Blastipede is seen in among the slugs who are entering Blakk's Citadel in Slugterra: Into the Shadows.

The Blastipede is a one-man artillery gun. It is a purely strategic slug, but if something needs to be blown up, this is the slug to do it. Its use is to drop mines or bombs over a battlefield or target; usually a large building or an enemy base would be the target. If it can deploy its mines successfully, the slinger now has the target in the palm of his hand. At any point, the entire facility can be destroyed.

A Blastipede is also useful in response to an Xmitter's Jambler move, as its mines are non-electric, allowing a slinger to bypass the handicap of using an Xmitter's, while their opponent is nearly defenseless.

Past this one (very impressive) use, the Blastipede is minimally useful. It has no direct offensive capabilities, and directly defensive it is limited to making a minefield, which the much more common Hop Rock can also do. 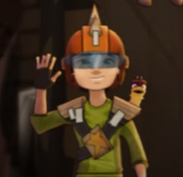