"Slugterra: Slug Fu Showdown"
Billy is the leader of the Hooligang. He is a teen rebel slugslinger who spends most of his time illegally tricking out his Mecha-beast to compete at the racetrack by day and by night he'll steal whatever he can get his dirty hands on. He gives Slugslinging a bad name! [1]

Billy first actually appeared in The World Beneath Our Feet Part 1 & The World Beneath Our Feet Part 2 first training with Locke and Lode at the first tournament and in the episode 2 he is watching Eli versing John Bull (seen beside the Shane gang watching) He really appeared in The Slugout episode The Hooligang was working for Dr. Blakk to convince Red Hook to work for Blakk but the Shane gang defeated him and his gang and got Doc a slug that Billy abandoned. He reappeared in Snowdance to get back to Eli for after there last seen they got fired from Blakk Industries by Dr. Blakk.

He later again takes over Quiet Lawn Cavern again in "Slug Fu Showdown" but Sally attempts to stop him and Glasses with Shorty using her Flopper slug Old Timer however failed. The Elemental Slugs arrived and aided her which send them packing out of the cavern. 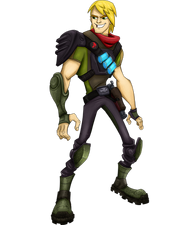 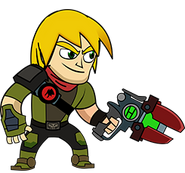 Billy as he appears in Slug It Out!

Billy, as seen in "The World Beneath Our Feet Part 1".

Billy cameo in "The World Beneath Our Feet Part 2"