Beeker is an AquaBeek who belongs to Eli Shane. He is empowered with the element of Water.

He was used repeatedly in "Deep Water, Dark Water" due to him being an amphibious Slug, therefore not needing a Torpedo Shell to be fired successfully. He almost died in that episode, but managed to return to Eli. 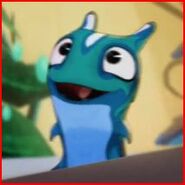 Beaker and some of Eli's Slugs

Beeker and Chiller in Slug Day
Community content is available under CC-BY-SA unless otherwise noted.
Advertisement