"Slugterra: Eastern Caverns"
Banger is an Armashelt Slug who belongs to Eli Shane. Banger is by far the best slug in the show, and wins Eli several fights through pure power before Eli is taught to plan out each action. When he hits 100mph this little guy turns into a crab-like version of himself with cannonball abilities. Banger once belonged to a Slinger named Jacques. Banger is a good natured Slug who is very proud of his abilities. In Light as Day Banger has gone Megamorph in order to help save Slugterra. Banger, along with Burpy, Chiller, Spinner and Joules know how to ride a Mecha beast as seen in The Journey Home. he is also the most powerful and epic slug no cap 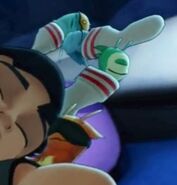 Banger sleeping in a sock.

Banger sees a Ghoul for the first time.

Come here and fight me!