Armashelts are heavy-duty teal Slugs that can deal a lot of damage, since their skin is like armor they have high defense. Eli Shane won an Armashelt in his second duel. He calls him Banger. They are common metal type Slugs who are similar looking to Speedstinger Slugs, Gazzer Slugs, and Crystalyd Slugs except for the colour schemes, Slug elements and the transformations. When transformed, they gain claws, armor, an underbite, change its eye colour from blue to orange and lose their legs and antenna.

It has been shown in both "Club Slug" and "The Unbeatable Master" that Armashelts can beat a Hop Rock just by slamming on it. Its preferred habitats are deep mines, quarries and mountain crevasses. Its power type is a cannonball slug. Its back has a stream of light.

A famous Armashelt is Banger, who belongs to Eli Shane.

The Armashelts is strictly an offensive-type Slug. It hits hard, but its moveset is very limited. This Slug specializes in single-target attacks; for a hard-hitting Slug with a wider array of attacks, see Hop Rock.

Sluglift is a toss-up move. On one hand, it can remove a powerful Slug from an opponents arsenal.  This can be a very underhanded move, especially if the Armaschelt's Slinger doesn't return the stolen Slug after the duel is over. On the downside, it's unlikely that the Armashelt's owner will be able to effectively use the Slug they took, since control over a Slug is connected to how closely a Slinger and a Slug have bonded. Additionally, once fired, the stolen Slug is likely to return to its original Slinger, vastly limiting the usefulness of Sluglift.

Outside of battle, the Armashelts' Canonbolt move can be useful for getting out of a tight spot. 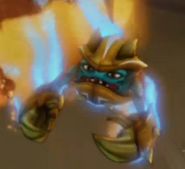