SlugTerra Wiki
Register
Don't have an account?
Sign In
Advertisement
in: Slugs, One Star Slugs, Backdrift Slugs,
and 2 more

Arachnet are, as its name suggests, spider-like Slugs. These Slugs are empowered with the element of earth and are uncommon. While in its protoform it can spin web lines and create small web nets. Its preferred habitat is Deaddrop Cavern and the Cavern of Time. Its power type is spinning webs and nets. It is the favourite Slug of Danna Por.

A famous Arachnet is Spinner, who belongs to Eli Shane.

Arachnet's are a solid all-around Slug, capable of fighting both offensively and defensively as well as being useful outside of combat.  They're very handy for the SlugSlinger who likes to gather Slugs from the wild, their Grapnet and Webwall moves allowing access to otherwise hard-to-reach places.  In addition, the Arachnet's sticky webs can be a good replacement for Slug Paper and nets, meaning less gear to carry and less gold spent on supplies.

Flashnet and Cocoono work as soild defensive moves, stopping an enemy Slug or Slinger from attacking at all. Webwall works to deflect attacks back on the opponent Slinger, making it a great low-risk move. Similarly Arachnorok deals damage while also serving as a defense, preventing an opponent from getting off another attack.

Threadstinger is the Arachnet's only purely offensive move, but this Slug's ability to combine offense and defense in one move serves to cover that potential weak spot in its move set.

An Arachnet in Quentin's memories. 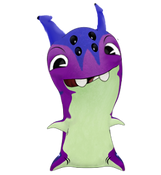 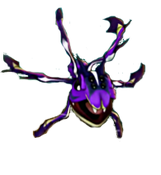