Amperling is the Ghouled version of the Tazerling. It has dark blue skin with a yellow belly and neon green lightning bolt-shaped antennae. They have electric powers like the Tazerling, but, like most Ghouls, they are stronger and more dangerous than their normal counterpart.  Amperlings can be defeated using an Tazerling's Quetzabolt attack.

Known owners of the Amperling mainly used by Dr. Blakk and his employees.

For a strategic ghoulslinger, the Amperling is a highly effective and powerful combat ghoul slug, just like its counterpart slug. It is unknown whether the Amperling can backfire and shock you after continuous use since no ghoulslinger is ever seen to use an Amperling multiple times.

Its weakness is that none of the attacks are physically destructive. Other ranged and defensive slugs with more experience like Geoshards and AquaBeeks can defeat it. 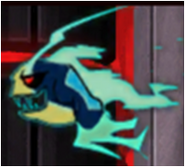 Amperling in Slug it Out 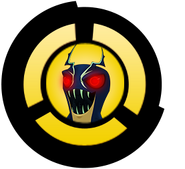 Amperling and Tempesto surrounded by pineapples

Retrieved from "https://slugterra.fandom.com/wiki/Amperling?oldid=86977"
Community content is available under CC-BY-SA unless otherwise noted.