Clint Butler
A Distant Shore is the eighteenth episode of Slugterra.

Notorious con man Gar Revelle has many convinced he has discovered the way to a secret land... a land that seems to be the surface! Eli uncovers the truth—Gar is getting his information from a coded Shane diary. Keeping the surface secret is Eli's number one mission, so he steals the diary from Gar, sparking an all out siege on the Shane HQ. Eli's friends rally to the defense and turn the invaders away. Eli realizes that for him to continue in SlugTerra, he's going to have to confide his greatest secret to his friends.

With the help of a journal (written by Eli's great-uncle) a ridiculed adventurer plans an expedition to "The Burning World" (i.e. the surface) He tells a crowd that all who believe him should meet him the next day. Eli hears about this and wants to go to stop him. When sneaking out from the hideout, Trixie and Kord spot him. The gang realize where Eli is going, but misunderstand his reasons for going and decide to go with him. When the gang arrives, the adventurer is excited that Eli wants to be apart of the expedition, but the gang is upset that Eli won't tell them why he needs to go. The gang returns to the hide-out while Eli manages to steal the journal. The adventurer and a group of slingers chase Eli back to the hide-out. Eli reveals that the burning world is real and (after some assurance) The gang duels the group of explorers. In the middle of the battle Kord is taken hostage and as a last resort Eli burns the journal using Burpy. The adventurer leaves after being called a fraud. Eli then reveals the truth to the gang that he came from the surface and shows them the tunnel through which he came to Slugterra.

A cavern where the exploration team met. 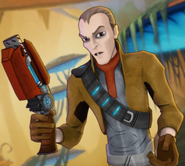 Locke sitting among the audience

Locke, Lode and Andre walking away from Gar after Gar is revealed to be a fraud.